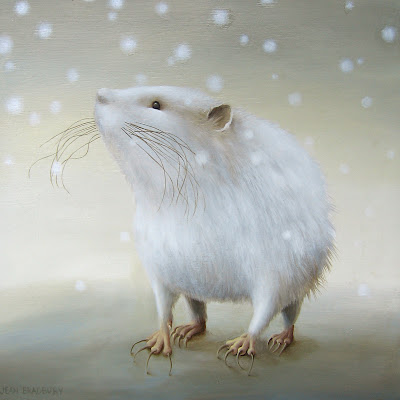 This is another version of the mountain beaver I painted last month. This one is albino and is enjoying the anticipation of the first snowy day of the winter. She is like a fat little snowball herself.

This painting is oil on panel and is ten inches square.
Posted by Safi Crafts at 11:51 AM 2 comments:

A Boy and His Dog

This painting started as an image of my son Henry and the dog he always wanted. But then I saw a picture of a llama and its shape was so much more interesting than a dog's. So it was going to be Henry and a llama. And then, for some reason, I wanted to contrast the rather serious looking llama with a flying chicken. But, in the spirit of the poet Frank O'Hara I may still call this "A Boy and His Dog".

Why I Am Not a Painter

I am not a painter, I am a poet.
Why? I think I would rather be
a painter, but I am not. Well,

for instance, Mike Goldberg
is starting a painting. I drop in.
“Sit down and have a drink” he
says. I drink; we drink. I look
up. “You have SARDINES in it.”
“Yes, it needed something there.”
“Oh.” I go and the days go by
and I drop in again. The painting
is going on, and I go, and the days
go by. I drop in. The painting is
finished. “Where’s SARDINES?”
All that’s left is just
letters, “It was too much,” Mike says.

But me? One day I am thinking of
a color: orange. I write a line
about orange. Pretty soon it is a
whole page of words, not lines.
Then another page. There should be
so much more, not of orange, of
words, of how terrible orange is
and life. Days go by. It is even in
prose, I am a real poet. My poem
is finished and I haven’t mentioned
orange yet. It’s twelve poems, I call
it ORANGES. And one day in a gallery
I see Mike’s painting, called SARDINES. 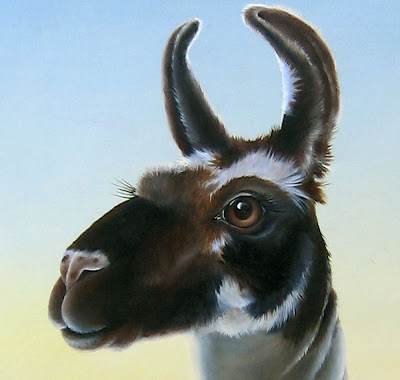 I feel "A Boy and His Dog" is about things happening all around us that we aren't aware of. Many of them are quite funny. It is also about letting go of ideas and lightening up, just like the chicken is doing.

You can see "A Boy and His Dog" at Homegrown in Fremont. (where I think I called it, brilliantly, "Llama and Chicken" on the label). I still want to paint more "love in a mist" seed pods at the bottom but will give it a break for now. The painting measures 12"x24" and is oil on panel. 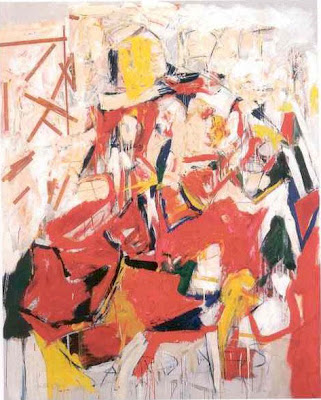 Here is the Mike Goldberg painting named "Sardines".
Posted by Safi Crafts at 5:29 PM No comments:

Where to see my work

I am hanging some new pieces today at Homegrown in Fremont. There are also some new pieces at the new Homegrown cafe in Queen Anne that opened last week. They have wonderful food that is locally sourced for those of us who like to support the locavore movement.

Of course I still have some large pieces at Woodside Braseth Gallery in South Lake Union too. Here is the link.
Posted by Safi Crafts at 3:12 PM No comments:

The Day We Met Was Long Ago 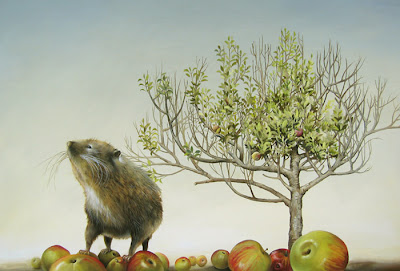 This is another painting about relationships. As I painted it I was thinking about so many different people in my life. Old friends, new friends, mothers and children, boyfriends and, of course, cats. 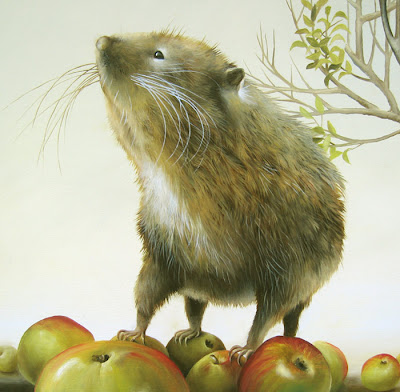 Oh little mountain beaver. How I love your whiskers.

You may notice that the painting was reversed in the previous post. This is another trick I use in Photoshop to see the painting with fresh eyes, after staring at it all day long. I also hold paintings up to the mirror for the same effect.

The painting is oil on panel and measures four feet across.
Posted by Safi Crafts at 8:04 PM 4 comments: 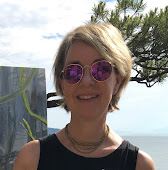